Paintball is an extreme, exhilarating activity that tests players’ abilities in a variety of areas, from collaboration to problem-solving. Paintball is a safe, difficult sport that sets opponents against one another in an effort to eliminate one another by firing gelatin capsules packed with colour that break on impact. Not to mention, it’s a tonne of fun. It’s a fantastic team-building activity. Where in the United Arab Emirates are the best places to find battle courses to gratify adrenaline junkies? Here is a list of the top paintball locations in the United Arab Emirates where you may unleash your inner warrior!

Also a fantastic location for paintball, the largest paintball field in the Middle East is located in Dubai at Battle Park. One of the top paintball parks in Dubai, the facility has 7 themed outdoor and indoor battlegrounds spread across about 500,000 square feet of space. They consist of Castle Siege, Junkyard Raid, Forest Fire, Zombie Wars, Urban Assault, Desert Storm, and Nuclear Bunker Warfare. Opponents are matched up against one another in programmed sessions at Ghantout.

Engage in nuclear bunker warfare with your opponents. I-Battle, Airsoft Madness, X-Battle, and Search & Destroy are just a few of the brand-new activities available at Battle Park. Along with normal paintball matches, the park also provides birthday and corporate outing packages, which include mouthwatering live culinary stations and BBQ buffets. 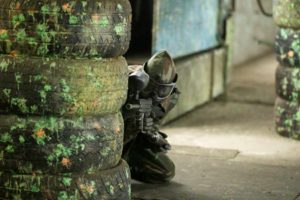 Wonderland Paintball offers a breathtaking forest-themed battlefield at the highway connecting Abu Dhabi and Dubai, complete with barriers made of wood, trees that provide shade, fake rocks, a spanned lake, towers, huts, bunkers, and trenches for hiding. With 25 players on each team, the field can hold up to 50 players at once. Referees who are qualified and experienced oversee sessions to ensure safety.

Wonderland Paintball does not allow children under the age of nine to participate in paintball games. This makes sense given how heavily combat-focused the sport is. But smaller children don’t have to miss out on the enjoyment. They can always take part in the fun shooting games that are offered.

Pursuit Games comes next on our list of recommended paintball locations in the UAE. This location, the Jebel Ali Shooting Club in Dubai, was a forerunner of the activity in the region. This paintball club in the UAE was founded in 1996 with the technical support of the top paintball operators from the west and offers everything from an outdoor arena to indoor battlefields. Pursuit Games provides many packages, just like the other paintball fields on this list. Remember that you must be at least 10 years old.

Sahara Amusement completes our list of the top paintball locations in the UAE. Players must select between The City and The Woods, two sizable themed outdoor battlegrounds, at this entertainment hotspot on the Dubai-Hatta route. The participants are then free to engage in combat in the location of their choice. Each region, totaling 2,400 square metres, is distinct. For instance, The City is a sandy expanse of land with overturned automobiles and various hiding places, whereas The Woods is a verdant plain.

“Walk-ons”—single participants who are not a part of any group—are accommodated on a first-come, first-served basis. They can meet lots of new people because of it. Sahara Amusement provides additional activities outside paintball, such as quad biking and karting, and camping.

A well-liked paintball location, this park in Sharjah is a paradise for tourists looking for fun activities that are safe but exciting. Sharjah Paintball Park is the perfect place for active people to play paintball because it has an outdoor field that can hold up to 200 players at once.

Currently, the park provides five different package options: Bronze, Silver, Gold, Platinum, and Diamond. The price here is determined by the quantity of games needed, the equipment, the number of paintballs permitted, and any extras. For instance, the Diamond Package includes 2 smoke bombs, 1000 paintballs, 7 games, and a neck and groyne protective. Costlier equipment is available.