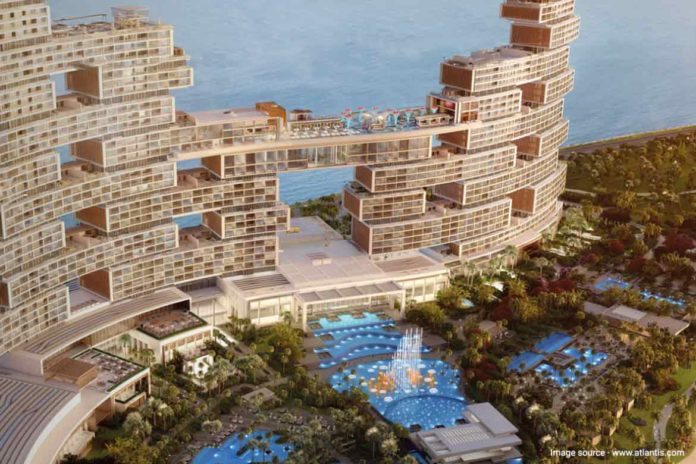 A massive new structure has been established at the apex of Dubai’s Palm Jumeirah. Atlantis Royal, a $1.4 billion hotel-and-residence complex, has been under construction from last 14 years. The primary aim behind this monumental structure is to raise the standards of luxury in the world’s most luxurious metropolis.

The 43-story, 87,097-square-meter (937,500-square-foot) structure has been erected adjacent to the Palm, one of the most famous building across the globe. The Jenga-esque shape of the building is surely a head-turner.

The gigantic property owns an inventory of 795 guest rooms along with 231 apartments. Further, the hotel’s modern curves and sky gardens provide breathtaking views of the Persian Gulf.

A 3,000-square-meter wellness center is also in the making, with a focus on not only fitness but also health and mental well-being. A 6-room Hammam Sensorium, 17 treatment rooms, a beauty salon, and indoor and outdoor fitness spaces will be among the state-of-the-art amenities on the inside. 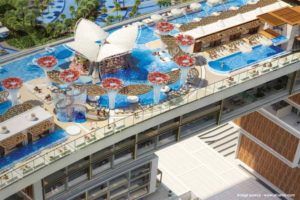 The lobby is expected to wow you, with its three aquariums including the world’s largest jelly fish tank, which houses roughly 4,000 jellyfish, placed in the lobby bar. The Skyblaze fountain, a world-first fire-meets-water fountain, is also added to adorn this spectacular property.

Atlantis Royal will also offer any and every cuisine through its 18 restaurants and bars, out of which eight will be run by award-winning celebrity chefs. Heston Blumenthal’s Dinner by Heston will serve experimental modern British cuisine; Jose Andres’ Jaleo will serve Michelin-starred tapas; Gastón Acurio will open the first traditional cevichera in Dubai; chef Costas Spiliadis will serve fine Mediterranean fare against a fountain backdrop; Ariana Bundy’s Ariana’s Persian Kitchen will serve Persian flavors; Hakkasan Group will add Ling Ling to the culinary lineup; and lastly the celebrity baker Mich Turner will host The Little Venice Cake Company to the resort.

Those of you who keep things in check will notice that there are seven eateries, not eight. The eighth acclaimed restaurant in Atlantis, The Royal’s dining repertoire will be a first-of-its-kind Nobu by the Beach, which will be hosted by the renowned chef Nobu Matsuhisa.

Four bars, an all-day dining restaurant, a casual restaurant, a café, a food hall, an entertainment center, day-to-night clubbing experience, and Cloud 22, will be among the other drinking and dining options.

Read more: 4 Desert Resorts in Dubai where you can experience luxury while surrounded by sand